The first thought striking our minds when we hear the word ‘angel’ is something beautiful, majestic and graceful.

Angel’s have always been associated with supernatural powers and charismatic personalities. The reality is that angel’s are not only constrained to imaginations and beliefs but also form an integral part of the jewelry worn by individuals. The most elegant way of adorning such jewelry is ANGELWING NECKLACE. 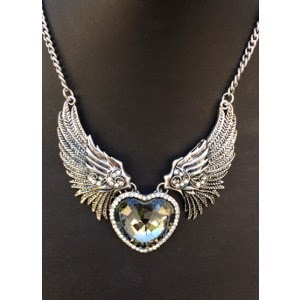 It has been often observed, that even the celebrities to whom we look upon as fashion inspirations are seen wearing stylish angel wing necklaces and pendants. Some of them wear it to quote a fashion statement, some wear them to support their own religious beliefs while some wear them to show submission to the supernatural. Whatever the reason maybe, the fact that can’t be ignored is that these angel wing necklaces do stand out as a piece of jewelry and add to the fashion quotient of an individual. 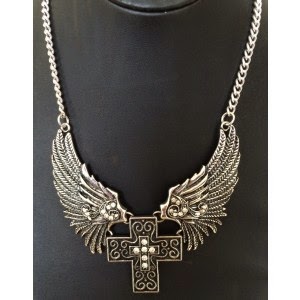 Hence, from the above discussion it can definitely be understood that angel wing necklaces are not just a passing craze but something that is here to stay. And one of the biggest reason for this popularity is that they are widely supported by the stars. So let’s not be boring and monotonous, let’s experiment with different looks, because after all its just one life that we have to ourselves. Check out the stylish line of angel wing necklaces offered by ROSSI AND ROSSI JEWELRY. They offer trendy angel wing necklaces and specialize in bikers and stainless steel skull jewelry. So explore this stylish world and create your own fashion standards.
Posted by Rossi Jewelry at 02:45 No comments:

Whenever we greet or adieu someone, the expression is either shaking or waving hands. This is where the style statement enters the stage and BRACELETS are the undisputed leaders of this arena.

Having a royal and ancient birth in Egyptian culture, today it has successfully entered into almost global human population’s lifestyles. Women and Men both have adorned bracelets as decorative accessories, from Cleopatra to Queen Elizabeth; Marilyn Monroe to First Lady Michelle Obama. The look of bracelet is effortless and can easily dress up any outfit. 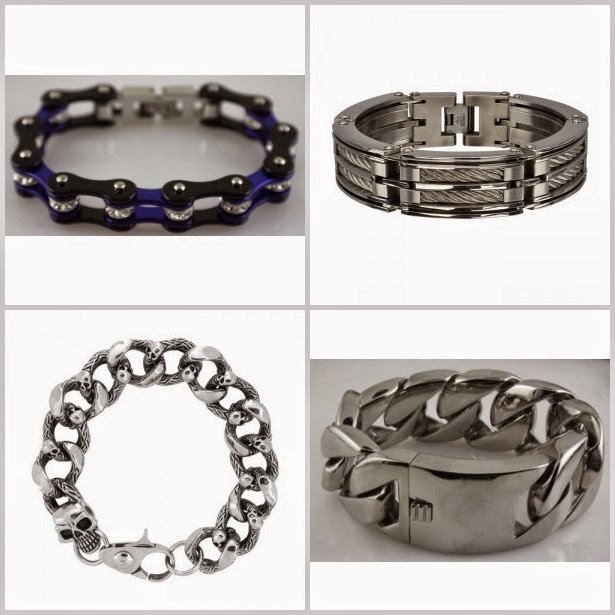 Style of a person is nothing but a representation of what she/he likes, desires or aspires .Therefore we cannot relate a person’s style with a fashion trend, because fashion changes but a person’s style remains the same from cradle to grave. In the same way these “STYLISH BRACELETS” are not attached to clothes.

Bracelets these days are made of a wide variety of raw materials from paper to diamond; there is a whole lot of variety available. But those everyday wear which are in trend these days are mostly made of rubber, stainless steel, leather or thread etc. The choice depends upon the event for what you are dressing up. Even casually, a “Stylish BRACELET “can make you look different and out of the crowd.

Bracelets are such a thing or platform where people from varied fields and walks of life can agree on the same point. POPE wears it to show his belief and loyalty towards Jesus , while a LIVESTRONG bracelet became famous for fund raising for cancer patients; a girl can wear bracelets suiting her dresses while choosing from a rainbow of options available in the market while a guy can wear according to his attitude. Bracelets with tiny things ranging from an Eiffel tower to a hello kitty, a Japanese panda or from a dog pendant to your girlfriends name engraved upon it are the common inns to represent your likes and love for someone or something.

Believe me; such a small piece around your wrist actually works like cherry on the cake. The bangles and boot bracelets are mere extensions of the bracelet only. So, show your allegiance and express yourself freely through these stylish bracelets and ROSSI AND ROSSI Jewelry is the best online platform to choose from unending options. They are the real specialists in skull jewelry, biker’s jewelry, stainless steel jewelry and all types of “stylish bracelets for everyday wear”. Catch you there.
Posted by Rossi Jewelry at 22:20 1 comment:

WHY STEEL RING IS SO POPULAR TODAY? 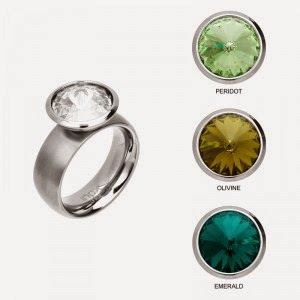 The jewelry industry is one such place that is ever growing and ever changing. Every now and then we have new trends and fashion following up. Though a large variety of men and women swear by diamonds, gold and silver when it comes to jewelry, especially rings, but not all folks are as lucky. The greater proportions of the population that cannot afford these expensive and lavish metals find solace in STAINLESS STEEL.

Today, stainless steel is capturing the jewelry industry by a storm. The fact that ‘steel ring’ is gaining this amount of popularity can be devoted to various inner characteristics that steel has.

Here are a few unique features that steel holds:

Just as the fashion world is progressing today, we individuals too want to dress our best. We want to look just as stylish as our celebrated celebrities and fashion jewelry plays an important role in completing this ensemble. Steel rings, hence, cannot be merely termed as pieces of jewelry, but can act as game changers in one’s fashion sense.

Posted by Rossi Jewelry at 01:12 No comments:

‘Jewelry’ in this single word we have not only the whole fashion world but also the creativity and style. The moment we hear the word jewelry we start thinking about the specific body parts like hand, neck, fingers, ears etc. Today, the people have jewelry for every piercing part. The buyers are always looking for the quality jewelry which is designer and is not breaking anyone’s bank. 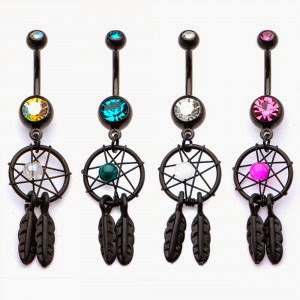 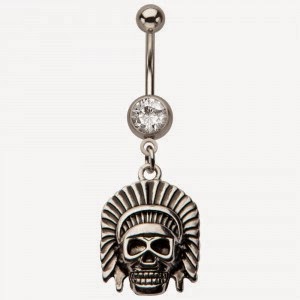 Below stated are some of the tips to select the right jewelry:
In a nutshell we can say that jewelry speaks a lot about the wearer. Therefore, one should be concern about the kind of jewelry they wore. Today the jewelry is available for all be it a men or a women. No gender, no age, no profession nothing can stop a passion of a wearer. For all those who have a passion for bikers’ jewelry Rossi and Rossi jewelry comes up with body jewelry online shop. Here the complete convenience is provided to the buyer by making online purchase easy and comfortable. The wide variety is available for both men and women like men necklace, skull jewelry and much more. This jewelry is guaranteed and maintenance free. To know more about their popular and exclusive designs visit. http://www.rossiandrossijewelry.com

Posted by Rossi Jewelry at 03:05 No comments:

When I first hear the words body jewelry the word that strikes my mind is “colossal”! It is extremely difficult to speak about something so cosmic in just a few words. But gathering courage and not sounding boring, I would like to enlighten you people about the frenzy that has hit the fashion folks dramatically- BODY JEWELRY! 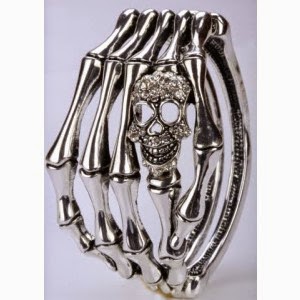 Jewelry refers to something that is worn for personal embellishment in the form of earrings, necklaces, brooches, rings, bracelets, anklets etc. It can be made out of any material and can be used to adorn any body part what so ever. For example, Gold,white gold, platinum,palladium,titanium, silver, stainless steel, mirrors, etc are the various materials that can be used to formulate jewellery both for men and women. But something that correlates most with body jewelry is stainless steel. With its bright silvery finish and resistance to tarnish, stainless steel jewelry has created a new benchmark in the jewelry world for itself. It is especially preferred for making body jewelry because it is non allergic and non reactive towards most skin types. Stainless steel being an alloy of iron, carbon, chromium and various other metals is resistant to rust or corrosion. It is fairly strong and resists breakage or bending. Hence, making it an apt choice for most jewelry buyers.

TIPS FOR MAINTAINING AND CARING FOR STAINLESS STEEL JEWELRY
Body jewelry is stretching its boundaries and emerging as an eminent part of our jewelry buying experiences. Coping with this demand, amongst the various body jewelry retailers, “ROSSI AND ROSSI JEWELRY” is providing great online services. It’s a complete body jewelry online shop. It won’t be wrong if we conclude that the jewelry industry is fast growing and hence should we!

Posted by Rossi Jewelry at 03:10 No comments:

“Clothes do not maketh men, Necklaces do!”

Necklace, a piece of jewelry that is worn around the neck, is usually considered to be a woman’s forte. But eventually, times are changing. Now that men and women are being treated equally in each and every field, adorning jewelry is not just a women’s cup of tea. Men’s jewelry and specifically men supporting necklaces is becoming a fashion statement in its own sense. Infact, according to the market researchers Euromonitor, in 2005, British men bought £136m worth of jewelry out of which the majority was contributed by necklaces. 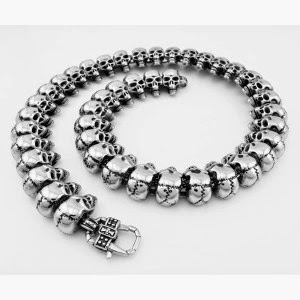 It is not an unknown fact, that men exhibiting jewelry dates back to early history. During ancient times, men were seen wearing necklaces that were made out of basic pieces such as stones, feathers, birds teeth etc. The rich and royal men were also seen wearing heavy necklaces made out of pure metals that added to aura of their entire personality. Nowdays men’s necklace have various forms. They range from simple thread necklaces with quirky metal pendants to beaded and stone necklaces or mere plain chains.

Not keeping it too mainstream and inpouring you with excess theoretical knowledge, I would like to list out a few trendy ways and tips for wearing men’s necklaces that can add to your style quotient.

I sincerely hope that the above stated points act as a useful help to all you readers.

Posted by Rossi Jewelry at 00:45 No comments:

Promote Your Page Too

Rossi Jewelry
Oak Brook, Illinois, United States
We are one of the emerging online Biker and Skull Jewelry shop worldwide.